The Naval Sea Cadet Corps is an organization for American youth who have a desire to learn about the Navy, Marine Corps, Coast Guard and Merchant Marine 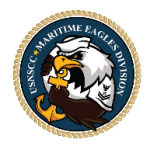 Upon its creation, 8 Juniors from the Sarasota Military Academy signed up.  These Cadets received permission to wear the U.S. Navy NWU once a week in show of Naval Sea Service possibilities among all Army Cadets.

In the beginning…
The Cadets had the privilege of traveling to JB McDill to spend time with U.S. Navy Reservists.  They built underwater robots, flew unmanned systems and learned all the Basic Military Requirements.  This was, also, the beginning of building a tremendous relationship with the U.S. Coast Guard Station Cortez that continues thru to present day.

Leadership
As the unit began to progress, the need for adult volunteers became significantly important to the growth of the Maritime Eagles Division.

Civilians or military (active, reserve or retired) personnel and Cadet parents, from all walks of life, are recruited to help our young Sea Cadets as they navigate thru the junior program, Navy League Cadet Corps (NLCC) to the Naval Sea Cadet Corps (NSCC).

Learn more about the requirements to become a volunteer

Submit an application to become a Cadet or Volunteer

The Maritime Eagles is the only Sea Cadet Unit in Manatee/Sarasota County. It is a division that prides itself in helping young men and women ages 10 through 17 years of age in becoming the best citizens of their communities.

Who are the Sea Cadets?

The Naval Sea Cadet Corps (NSCC) is an organization for American youth ages 10-17 who have a desire to learn about the Navy, Marine Corps, Coast Guard and Merchant Marine. Sea Cadets are authorized by the Secretary of the Navy to wear Navy uniforms appropriately marked with the Sea Cadet Corps insignia. The objectives of the Sea Cadet program are to introduce youth to naval life, to develop in them a sense of pride, patriotism, courage, and self-reliance, and to maintain an environment free of drugs and gangs.